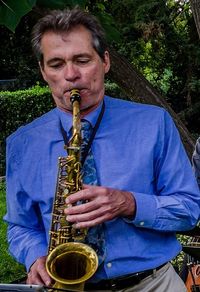 Doug Miller – Alto Saxophone
Music has been a huge part of this extraordinary Alto Saxophone player since the early 1970’s, in the San Joaquin Valley and throughout the San Francisco Bay Area.  Doug Miller says, “I am humbled when he thinks of the good fortune to perform with many notables in jazz and pop circles, including Tom Harrell, Bill Watrous, Toshiko Akiyoshi, Lew Tabackin, Mary Wells, The Coasters, The Four Freshmen, Clare Fisher, Tower of Power, and Ed Shaughnessy.   Doug started playing sax when he was nine, and always enjoyed the “Big Band” sound.  In college he performed with the Stanford Jazz Band, the Men’s Glee Club, and the notorious Stanford Marching Band. Doug's Website 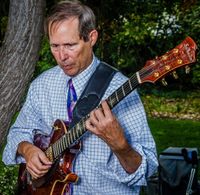 Mike Keating - Guitar
Mike Keating has been playing Jazz in various venues in the Bay Area for nearly 30 years, including Garden City in San Jose and Borell’s in San Mateo. For years he was a mainstay at St. Michael’s Alley in Palo Alto, as part of the Phil Aranda Quintet and with his own trio. His guitar playing has been heavily influenced by Kenny Burrell, Wes Montgomery, and Jim Hall. “A few years ago I had a chance to play a session with Mimi Fox. It was a real eye-opener. I learned just how much energy, focus and intensity you need to bring to jazz to make it really swing. Mike's Website 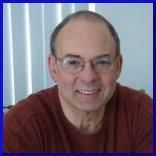 Bob Applebaum - Piano
For many years, music was an abiding love but a professional sideline for Bob Applebaum, who taught physics and chemistry at New Trier High School, Winnetka, IL, from 1965 until his retirement in June 2000.  Since moving out the San Francisco Bay area Bob has continued to compose and perform with many of the great Jazz groups.  Among his peers in the Jazz arena he is hailed as one of the most creative and imaginative jazz piano soloists.   As a jazz pianist, Bob has three albums to his credit: Hora and Blue (with the Modern Klezmer Quartet, on the Global Village label, 1993), The Apple Doesn't Fall Far from the Tree (jazz piano duos with his son Mark Applebaum, on the Innova label, 2002), and Friday Night Jazz Service (2007). Bob's Website 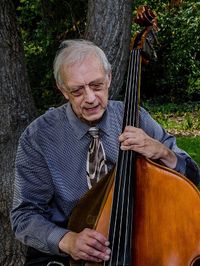 Mike Boone - Bass
Mike Boone recalls a childhood spent listening, transfixed, to music that struck him like spells spun by a wizard.  It propelled him on a lifelong quest to figure out how to produce, order and master those sounds -- to find the magic wand.  He studied the acoustic bass, cello, tuba, piano, bass guitar, conducting -- anything that opened the doors to orchestras, bands, jazz and pop groups, and this led to a college scholarship, a B.A. in music literature and theory, and a freelance career in music begun in Southern California.  Now living further north, where he had an intervening career in law in San Francisco, he continues the quest as he and wife Joann enjoy the arts, the Bay Area, traveling, and their three grown sons.  He tries not to let the impossibility deter him.  With his hand in orchestras, chamber groups, vocal groups, jazz groups and recording, he is always amazed at how jazz melds the total of his cultural and life experiences. 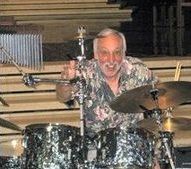 Rick Ciardella - Drums
Growing up in an Italian family, music was a big part of everyday life and was the center of all family gatherings.  Rick's fondest childhood memories included at the age of 6 playing drums at holiday gatherings.  So, for this Bay Area drummer, music is part of who he is.  Influenced by many fantastic musicians, Rick studied with the legendary jazz drummer Ed Shaughnessy, jazz pioneer and educator John DeFoor and Hal Reese, the first Fox Studio principal percussionist.  Here's what musicians have to say:  “Rick sets the rhythm pattern and solid tempo allowing the solo instruments to explore their interpretation of the great American Jazz Standards.” Rick is also an avid chorister performing regularly with the Stanford Symphonic Chorus. Rick's Website